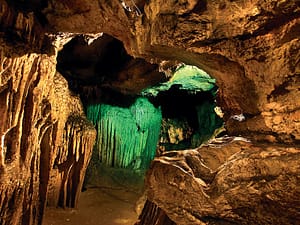 Known as the National Park “Grutas de Lanquín” covers an area of 11 hectares, it is a majestic and enormous complex of caves of great calcareous rock beauty, in which the place where the cave system ends is unknown. These formations are considered sacred by the Q’eqchi’s who inhabit the area, it is believed that it is the “Heart of Heaven” and that secrets are hidden in the bowels of these caves.

Some local guides and specialists have entered up to 3 km. Among its formations can be seen animals and shapes that resemble, such as: the eagle, among others. The Caves of Lanquín stand out for being a natural habitat for bats, so it is common to find guano along the route. They are large caves initially illuminated by spotlights through a power plant, has railings for some parts of difficulty and steps. The route that is open to the public is approximately 400 mts.

It should be taken into consideration to wear appropriate shoes and flashlight because as you advance into the cave the lighting is less dense until you reach dark parts. Traditionally the tourist who visits the Grottoes of Lanquín goes out by the same place where he enters, a factor that makes interesting and full of adrenaline the route is the option of leaving by an unconventional exit where you have to climb a part, ending at the entrance. This option can only be taken if you are accompanied by a Local Guide, since they know the way and have experience.

Some of the most interesting rooms and formations include: The Altar of the Picota where Mayan ancestors performed their rituals and gratefulnesses to the earth and its cosmovision. The King’s Fall Bridge, named after King Leopold of Belgium who arrived in Guatemala to the grottoes in 1958, when passing through a bridge made of sticks of dashes, the wood could not bear the weight of the king and those who went with him, when he broke, Leopold of Belgium fell. When the bridge was rebuilt, it was named after him.

The Lanquín river rises from the bowels of the cave (although there is no known point of origin), when leaving the caves becomes a light blue color, attracting the tourist’s attention and inviting him to swim in it. It offers the possibility of tubing. In the lodgings at the end of the tour you can rent tubes for the activity.