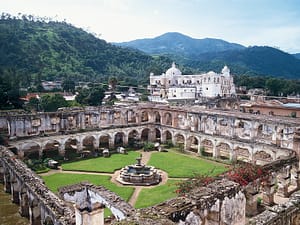 Antigua Guatemala or Santiago de los Caballeros de Guatemala, due to its beautiful architecture dating from the Spanish colonial period was declared a World Heritage Site by UNESCO in 1979!

It currently has about 30,000 inhabitants and is located in the beautiful Panchoy Valley, surrounded by three majestic volcanoes. Its stone streets, the facades of its houses and churches, its climate, make it unique in the world. Antigua is probably the most visited place in Guatemala. Its construction began in 1541 following the design of an Italian architect and was abandoned in 1776, due to the destruction caused by the earthquakes of Santa Marta in 1773.

Together with Mexico and Lima it was considered one of the three largest capitals of the new world; the visitor realizes this when seeing the imposing constructions in the city. During the Holy Week Antigua is even more interesting because it becomes a place of religious fervor, its streets are covered by carpets of sawdust or flower petals that mark the passage of the imposing processions, a tradition that has existed for more than 500 years.

Antigua also enjoys a very active cultural life: art galleries, museums, fine restaurants and beautiful hotels, some of them located in old colonial buildings such as Casa Santo Domingo, in addition to its more than 50 Spanish language schools, which are internationally renowned. Antigua Guatemala can be the starting point to visit other areas of the country: Tikal, Chichicastenango, the Pacaya Volcano, and many other interesting places.